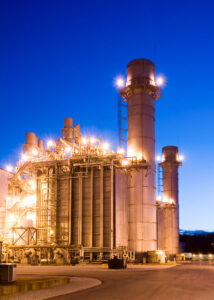 The New Covert Generating Facility (New Covert) is a natural gas fired, combined-cycle plant, consisting of three individually dispatchable combined-cycle units and state of the art emission controls. The plant, located in Covert, Van Buren County, Michigan, has operated since 2003. CAMS has operated the facility since 2015 and the facility is owned by Segreto Power Holdings, LLC, a subsidiary of Eastern Generation Holdings, LLC. The New Covert plant can provide electricity to over one million homes.

The upgrade involved replacing several rows of turbine blades and vanes on each turbine and resulted in the need for less cooling air and a corresponding increase in fuel consumption, exhaust flow rate and temperature, turbine efficiency, and electricity production. In parallel, the plant upgraded its emission control systems for both NOx and CO. Upgrades to the NOx control system involved the ammonia injection grid and the aqueous ammonia system to ensure an emission concentration of 2 ppmvd at 15% O2 could be achieved.

As part of these upgrades, over the last three years New Covert developed and implemented a new ammonia distribution system for NOx control. The improved system includes new pumps, control systems, distribution headers and nozzles, and a reformulated Selective Catalytic Reduction catalyst. As a result of these investments, New Covert reduced ammonia consumption by 7.5%.  The relative cost for ammonia was $240,000 less in 2021 than in 2018, while increasing electricity output and producing lower concentrations of NOx. Overall, the project was beneficial to the environment while improving operational efficiency.

Learn more about our sustainability efforts, operations and maintenance services and more.